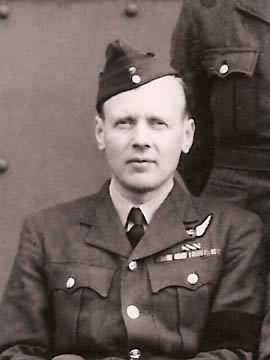 James (Jim) Montgomery died in England in January 2012 in his 96th year and was survived by wife Margaret and family. Jim and Margaret were married for 62 years.

Jim was born in Comber in 1916 to John and Martha and had one brother, Robert, and two sisters Kathleen and Jean. They lived in Mill Street. He was a keen sportsman and played for the 1st XI North Down Hockey team and for North Down Cricket Club.

Jim joined the Royal Air Force before the war and was in 149 Squadron stationed at Mildenhall and Lakenheath Airfields in Norfolk. In 1947 Margart joined the WAAF and they married in 1950 and moved to Watton where they had 7 children.

Jim had a very interesting career in the RAF with the Operational Aircrew as a Rear Gunner flying in Wellington Bombers where he made over 40 operational missions over Germany and sustained wounds on one of those flights.

Being a Rear Gunner he was a sitting target as the German planes came from the back and every time he fired his machine gun he shouted, " One shot more for the honour of Down"

In 1941, on one of his night missions, he was shot at by 3 German fighter pursuit planes and he was bombarded with explosive shells of 50 calibre but he continued fighting and brought the 3 German planes down even thiough he was badly wounded and was bleeding heavily from his injuries.

At the age of 27, he was awarded the Distinguished Flying Cross for Bravery and, although not being able to travel to Buckingham Palace to receive his honour in 1943, he received a letter from King George VI.

He was offered a discharge by reason of his wounds, but he did not take it. He was offered other forms of service but rather than turn to these Monty faced a Medical Board of 14 doctors and secured a return to his squadron on Operational Duties.

His last wish was that his ashes be scattered over Strangford Lough near his beloved Comber.