Menu
Close
You are here: North Down Cricket Club > Uncategorised > A Club Steeped in Tradition

A Club Steeped in Tradition 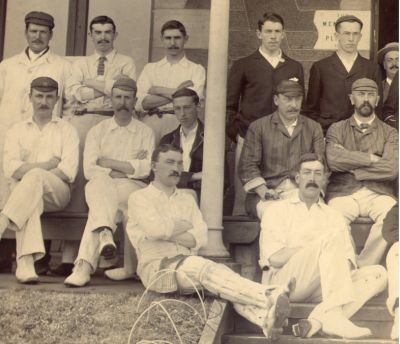 Above: the inaugural winners in 1897

By the club historians...

When North Down face CIYMS in the Senior Challenge Cup Final at The Green on Friday it will be a new experience for 8 members of the team. Only Ryan and Andrew Haire with 15 appearances between them and Peter Eakin with 1 will fully appreciate the significance and history of the trophy that will be on display in front of the pavilion.

The home side, with the Final being played for the eighth consecutive year at The Green, should have a good support from those who have enjoyed the experience of playing at this stage and the many youngsters who play in the junior teams. There have been 3 Golden Eras in the club’s history the first coming from 1887 until 1899 when the great trophy was won 9 times. Oscar Andrews reigned supreme with the bat and ball and the Turner brothers, Willie and Sam, and Tommy Graham took the bulk of the wickets under the captaincy of John Andrews Jnr.

The 2nd Golden Era was between the 2 World Wars 1919 until 1939 when James and Tom Macdonald, Jack Dearden, DGR McKibbin and Jackie Shields ruled for 2 decades under the leadership of the inimitable Willie Andrews.

The most recent Golden Era in Senior Challenge Cup terms began in 2000 and finished in 2010.

The cup sides at this time were bursting with talent and although many players graced the Final, some stood out. Robin Haire with 12 North Down finals under his belt played in 7 of these Millennium Finals as did Jo Montgomery with two others prior to 2000.

Ryan Haire and the classy David Kennedy both scored unbeaten centuries while both players and Andrew White, Jo Montgomery, Neil Russell, Peter Shields and Robin Haire added plenty of runs to the score book and at the same time there were wickets aplenty for the likes of Billy Adams, Marty Dalzell, Gavin McKenna, Ralph Coetzee and Peter Connell - who can forget the celebrations when Connell dismissed his fellow Kiwi, the brilliant Craig McMillan in 2010?!

Ryan Haire, destroying with the bat, Martin Moreland taking many crucial wickets and Shields, top wicket-keeper and leading the side during these glory years, played in all 10 Finals during this period.

In contrast to the 31 outright cup wins and 1 shared, CIYMS have won this trophy only 3 times but recently in 2015, 2017 and 2019 and have plenty of dangerous opposition to the home side including former North Down players James Cameron-Dow and Jacob Mulder. The sides have met already this season at Belmont in the Premier League when North Down were successful by 53 runs but in cup terms, the last big meeting in a Final was at The Green in 2010 when North Down won by 74 runs and Taimur Khan was MOM with 89 and 3 for 14.

Ali Shields leads a very talented side into this Final, which, weather permitting, should be a classic.

You can read more about all of the Senior Cup 'characters' in The Vault...