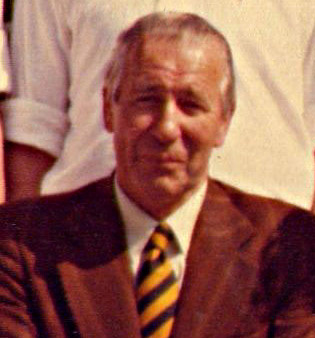 Born before the Great War, Jim Barry’s life spanned over 90 years during which he served North Down manfully for over 70 of them. He donned many roles not least as club chairman from 1966 to 1979 during the challenging transition years. He followed in the footsteps of Willie Andrews and James Macdonald as a committed administrator with both club and union, although at times he could be brusque and abrasive. But behind his stoic exterior was a heart of gold and, like a good wine, Jim mellowed in later years and became a much loved and highly respected member. He played at every level for the club from boys to 1st XI, but his best years as a cricketer were as the 2nd XI wicketkeeper where he was never afraid to sound off when returns from the outfield failed to match his expectations. The younger members affectionately nicknamed him “Wasim Bari” after the legendary Pakistan test star, but typically Jim took it all in his stride. He was a tireless worker within the club during the tough post-war era and also joined his lifelong friend George Orr of YMCA to serve on the NCU Junior Committee. He was chairman of that committee in 1975 when it was amalgamated with the senior committee and then served for almost 20 years as a divisional chairman. He was also an Ulster Town selector for many years.

Like his mentor, Mr Willie, he was a staunch North Down man within the union and never afraid to wear both hats if the situation demanded. He turned down the presidency of the NCU several times but was later deservedly awarded an Honorary Life Membership in recognition of his long service.

Jim’s official positions within the club included the presidency and, in later years, patron, but he never forgot his roots and was just as happy marking the wicket or serving tea from the huge teapot with his white apron around his waist. His wife Sally was totally supportive within the Ladies Committee and a willing chauffeur picking him up when “meetings” in the clubhouse lasted longer than expected!

He umpired for some time and was a popular President of the Northern Ireland Association of Cricket Umpires and Scorers (NIACUS), for over 20 years. He always ensured every umpire was well treated at The Green and loved nothing better than to enjoy a few drams with them after the match. In a similar vein he was a member of the North Down “Thursday Club” of Eddie Doherty, Sammy Haire and himself, who, after working diligently on the ground, appeared to sort out all the problems in the North Down world over a few tots in the bar!

If Jim was a modest cricketer then the same could not be said for his hockey prowess. He played in the best ever North Down hockey teams of the Thirties, teams that won the Ulster Senior League, Kirk Cup and contested the Irish Senior Cup final. He was also a hockey umpire and in 1978 became president of the Ulster Branch.

In the twilight of life, Jim and George Orr travelled together to many North Down games home and away, and they were engaging conversationalists to anyone walking the boundary. He revelled in North Down’s success in the modern era and as club President took immense pride in the club’s achievements at every level. One of our last photographs of him was in the middle of the 1st XI champagne celebrations after the 2003 Challenge Cup final victory over Waringstown. He loved every minute of it.

We didn’t know at the time but it was to be his last North Down celebration, as he declined in health during the winter and, although he put up a brave fight, he passed away.

Jim “Wasim Bari” was a gentleman at heart and gave trojan service to North Down.